Twitter and Facebook have suspended numerous accounts that they say are tied to a Chinese disinformation campaign against pro-democracy protesters in Hong Kong.

Twitter said Monday it suspended 936 accounts likely related to the activity. The company said the disinformation campaign was designed to “sow political discord in Hong Kong, including undermining the legitimacy and political protest movement on the ground.”

Over the weekend, approximately 1.7 million anti-government protestersgathered in Hong Kong to rally peacefully against the Chinese government, which assumed rule of the former British colony in 1997. Protests erupted in June following a now-suspended bill that would allow criminal suspects in Hong Kong to be extradited to mainland China.

“Based on our intensive investigations, we have reliable evidence to support that this is a coordinated state-backed operation,” the company said in a blog post. “Specifically, we have identified large clusters of accounts behaving in a coordinated manner to amplify messages related to the Hong Kong protests.”

Following Twitter’s announcement, Facebook said in a blog post that it was acting on a tip from Twitter. Both companies face increased pressure to crack down on fake accounts and false content on their platforms in the aftermath of the 2016 presidential election, during which foreign actors used the sites to sow division around social issues.

Every day I go out and see stuff with my own eyes, and then I go to report it on Twitter and see promoted tweets saying the opposite of what I saw. Twitter is taking money from Chinese propaganda outfits and running these promoted tweets against the top Hong Kong protest hashtags 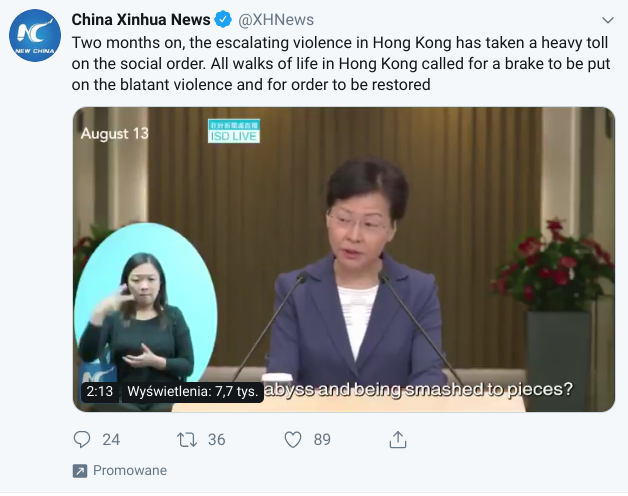 1,610 people are talking about this

Twitter is blocked in China, but many of the accounts it discovered were using virtual private networks, which encrypt and anonymize web traffic. The accounts it suspended represent the “most active” portion of the broader spam campaign, which it estimates to include about 200,000 accounts.

As a result of the announcement, Twitter said it would no longer accept advertising from state-controlled news media entities.

The company didn’t call out any specific news outlets in the post, but said it was including any entities that are “either financially or editorially controlled by the state.” The organizations are still able to use the platform for communication, just not for advertisements.

Facebook removed seven pages, three groups and five accounts in what it calls coordinated inauthentic behavior targeting Hong Kong. About 15,500 accounts followed one or more of the now-deactivated pages, while roughly 2,200 accounts joined at least one of the groups, Facebook said.

WATCH NOW
VIDEO06:46
What is Hong Kong’s relationship with China?

“We’re taking down these Pages, Groups and accounts based on their behavior, not the content they posted,” Nathaniel Gleicher, Facebook’s head of cybersecurity policy, said in the post. “As with all of these takedowns, the people behind this activity coordinated with one another and used fake accounts to misrepresent themselves, and that was the basis for our action.”

Individuals involved in the campaign used fake accounts, some of which had been already spotted and disabled by Facebook’s automated systems, to manage pages posing as news sites, post in groups, share content and direct users to sites off of Facebook, the company said.